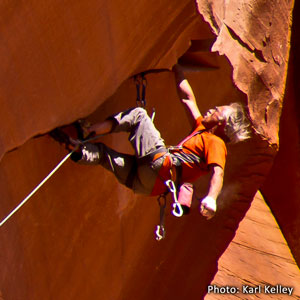 Jay Smith has been climbing, guiding and rigging for longer than he cares to admit. He has not focused on any one type of climbing, but pursues all aspects of the sport including rock, ice, big wall, alpine, sport climbing and most recently canyoneering and caving. However, his greatest passion is establishing quality and classic first ascents throughout the world. He has completed nearly 2,000 new routes, from El Capitan to the Himalayas, including Antarctica, Iceland, Canada and Patagonia. Some of these new routes include ascents of the continent’s most difficult summits.

For more than 20 years, Jay was Director and Chief Guide for America’s most elite Special Forces – Seal Team Six, and also worked with the Marine Mountain Warfare Training Center and the U. S. Air Force PJ’s. He instructed these groups in all aspects of climbing and mountaineering.

In the mid 90’s he designed, rigged and directed the first Eco Challenge ropes course and X Games Adventure Race. Since then he has become Primal Quest’s ropes course Director and established the world’s largest ropes course in Moab, Utah. He strung over 6 miles of rope for ascents, descents, high lines and via ferratas. Many of these adventure races were televised on MTV, Discovery, NBC and ABC television networks.

Jay is proud to be involved with PMI for over 20 years. “PMI is awesome to work with. Not only are the people great and have incredible technical experience, but have an outstanding product line and, for sure, manufacture the finest ropes in the world.”

Jay lives in Moab, Utah with his wife Kitty Calhoun, where there will always be plenty of untapped rock to play on.