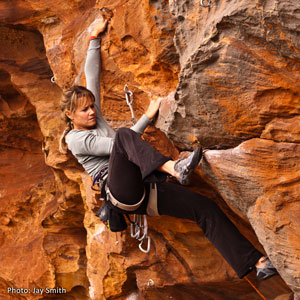 Kitty Calhoun depends on PMI rope for her work as a climbing guide as well as in her endless pursuit of climbing goals and dreams. Kitty was a rock instructor for Outward Bound in 1982, a guide for the American Alpine Institute from 1985 – 1990, and she has guided numerous 19,000’ to 22,000’ peaks in Alaska, Argentina, Bolivia, Nepal, and Peru over the past years.

Kitty is known for her minimalist approach on alpine ascents. However in 1990, while leading a group on the 3rd ascent of the West Pillar of 27,800’ Makalu, she employed 10,000 feet of PMI rope. As a result, Kitty became the first female to climb Makalu.

Other ascents by Kitty include the Cassin on Denali, the 2nd ascent of Bouchard Route on Chacraraju, the 1st American female ascent of Dhaulagiri, two new Grade VI wall ascents in Kyrkygzstan, a new route on Middle Triple Peak in Alaska, five routes on El Cap, and the ascent of the Diamond Couloir on Mt. Kenya. In addition, Kitty has been guiding all-women’s rock and ice climbing clinics for Chicks with Picks since 1999.

Kitty is proud to be involved with PMI for the last three decades. She lives near Moab, Utah with her husband Jay Smith. In her spare time she enjoys watching her son Grady play football.