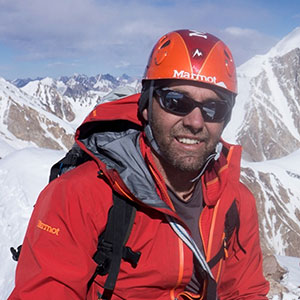 Mick Follari has traveled extensively in search of remote difficult alpine objectives, including numerous expeditions to Peru, the Himalaya, the Canadian Rockies, New Zealand, and across the U.S. In 2013 he received the Copp-Dash Inspire Award to explore first ascents in Afghanistan, where he summitted virgin Peak 6041m and attempted a 3000 foot ice and granite wall on an unclimbed 5850m peak. That year he also made his 10th expedition to the Cordillera Blanca of Peru, returning to a perilous unclimbed face on the 6300m Santa Cruz that nearly claimed his partner’s life the year before. PMI ropes and products have been trusty companions in such distant corners of the Earth.

As a photo/videographer, he has published images in Men’s Journal Magazine, with the National Geographic Society, Deadpoint, Klettern (Germany), Escalade (France), and other climbing magazines, and has an ongoing commercial photo relationship with PMI, Marmot, LaSportiva, and others. He also participated as photographer on the Marmot-sponsored Zanskar Odyssey and alpinist/photographer on the Incan Odyssey, contributing video footage to both festival films, and has published writing in print and on the web.