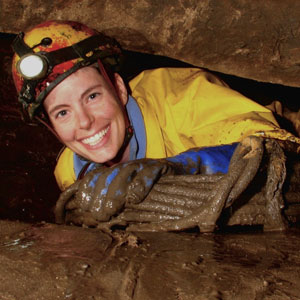 Nancy Aulenbach has been an active caver for 45 years, and loves to be on rope more than anything else in the world. Thanks to her mom and dad taking her on caving trips before she was even born, Nancy feels more comfortable in caves than above ground. Aulenbach remembers the late founder of PMI, Steve Hudson, giving her a t-shirt to wear around at a national caving convention in the mid-1970’s to advertise the new company. Although the shirt hung down below her knees, she wore the PMI logo proudly. Nancy’s parents knew Steve’s new rope was a game-changer in the market, and it’s been her family’s only rope brand ever since.

Some of Nancy’s adventures have taken her caving in Iceland, Mexico, throughout Europe, Bermuda, New Zealand, Jamaica, the Greenland Ice Cap, and across the United States. Aulenbach told PMI, “I like to travel the world underground, and come up to surface every once in a while”. Nancy co-starred in the IMAX movie, “Journey into Amazing Caves” which premiered in 2001, and has also appeared in several caving documentaries on television.

Nancy’s husband Brent and their daughter Scout are just as passionate about caving as she is. They live in Lilburn, GA, near the heart of vertical caving country, TAG, where Tennessee, Alabama, and Georgia meet. Nancy is proud to have represented PMI in the field for over 40 years, and she shows no signs of slowing down anytime soon.