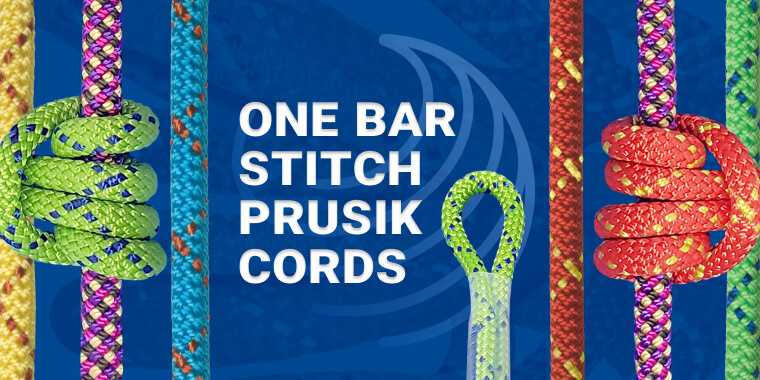 PMI USA Made Ropes and Cordage is the preferred choice of rope and rescue professionals worldwide. Manufactured to exacting standards in our ISO 9001 accredited production facility, PMI Ropes are renowned for exceptional durability and quality.

PMI Prusiks are specially engineered to pass the original “pinch test” devised by Arnor Larsen for optimum grabbing action. Because professional rope users – and especially rescuers – have long relied on Prusiks as a foundational tool, these small cords have attained quite a devoted following. However, some thirty years ago practitioners began to notice variations in their performance. This resulted in a slew of tests being performed over a period of years by the British Columbia Council for Technical Rescue, Alpine Center for Rescue Studies, and other industry experts, to determine the reliability and optimum conditions for prusik use.

Results were mixed, at best.  At one point, a statistician by the name of Jerome Stiller (who also was a technical rescuer himself) compiled and crunched the results of several tests, presenting his results at the International Technical Rescue Symposium in a series of reports.

You can read the reports from Jerome’s studies at “When Prusiks Go Bad, or Are You Sure That Thing is Gonna Hold?”  and “Tandem Prusiks: Is No News Good News?“. Perhaps the most astounding finding was that even when Prusiks were properly tied, set, and (in the case of tandem-prusiks) spaced, some of the more commonly used configurations of prusiks resulted in failure at an alarming rate – especially under dynamic loading conditions. Conservatively, Jerome put the failure rate in excess of 20%, or 1-in-5 tests.

Further testing ensued by industry professionals looking to optimize results. Eventually it became clear that the specific relationship between rope and prusik was key, including construction and materials of both the cord and the host rope, environmental conditions, age and wear, etc. Further, it was noted that prusiks that were neither too soft nor too stiff performed best. A prusik that was too soft would be too “grabby” and would catch too quickly – thereby imparting a higher force and resulting in catastrophic failure. On the other hand, a prusik that was too stiff would allow too much slip or fall distance – again, increasing the impact force and sometimes not even catching at all. A just-right prusik, though, would grip early without grabbing, absorbing force at a slower rate resulting in a softer catch and fewer failures.

In other words, users must employ prusiks only with great caution and thorough research to ensure that they are being used correctly and will perform as expected.

It was Arnor Larsen who postulated the “pinch test” as a reasonable field-test of prusik cord viability. The pinch test is performed simply by pinching a bight of the prusik cord between thumb and forefinger. A small ‘eye’ should appear in the bight – enough to see through but not larger than the diameter of the cord. If there is no eye in the bight, the cord is too soft and will be too grippy. If there is too large an eye the cord is too stiff and will not grip readily enough.

Homemade prusik loops may be formed by joining ends of a cord together with a double-fisherman’s knot, or some other appropriate termination. With the popularity of prusiks increasing, several manufacturers now offer prusiks with sewn terminations, for greater convenience of use.

PMI’s sewn prusiks are formed in what is called a ‘bound loop’ configuration; a clear protective sleeve covers the stitched termination, and also draws the loop together so that the strand opposite the stitched end floats through the protective sleeve. This allows the remaining loop size to be adjusted smaller or larger so that the bight can be cinched down to help hold the connector more securely in place. The bound loop design also allows for cleaner rigging, with less drooping cord to snag on protrusions.

At PMI, strength and security are always top priority, and our sewn terminations are no exception. PMI 8mm and 7mm prusiks offer exceptional strength ratings of 5620lbf (25kN) and 4271lbf (19kN), respectively, in a looped configurations.

For Made in USA ropes and cords that are second to none, you can rely on PMI!